As expected, Apple has sent out invites for its latest media event which is being held Thursday, October 16th at 10:00am Pacific / 1pm Eastern. The invitations read: “It’s been way too long," and asks select members of the press to attend the keynote at Apple's Town Hall Auditorium in Cupertino, California. 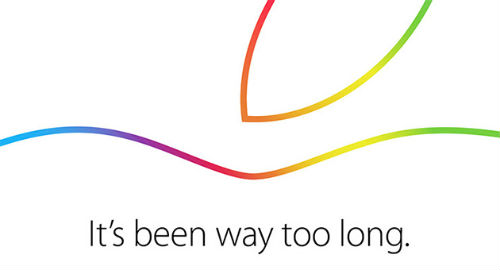 Apple is expected to announce its new iPad lineup, which will include a thinner iPad Air 2 and possible 12.9-inch iPad Pro, at the event (see images of the alleged iPad Air 2 here). The second-generation iPad Air is expected to feature recessed volume buttons, Touch ID, a relocated microphone, a new A8 or A8X chip and possibly 2GB of RAM . It is still unclear if Apple plans to announce a third-generation iPad mini this year.

Some believe Apple will discontinue the 7-inch tablet since the larger iPhone 6 Plus is now available. There has also been zero leaks of any new iPad mini model, unlike the iPhone 6 and iPad Air 2 which have been leaked a lot.

While the iPad will most likely be the main focus of the event, previous rumors have suggested that Apple may also announce a new 27-inch iMac and 12-inch MacBook Air with Retina displays. Other possible announcements could include an Apple TV refresh and the public release OS X Yosemite.