How to Unlock All the Scenes in Star Wars: Tiny Death Star

Star Wars: Tiny Death Star has received a special holiday update which makes it easier to unlock all the hidden "Scenes" in your Album. Version 1.2 of the game allows you to deliver bitizens with a question mark to any level. This is great because you can now try to match the correct Star Wars character to the right level to unlock all the scenes. For example, delivering Boba Fett to the Cloud City Spa will unlock the Hans Solo carbonite scene.

This feature was just released today, so I haven't had the time to unlock all of the scenes, but I will update this page as I figure out each one. Also feel free to pitch in and tell us who unlocks what scene or any other tips in the comments section below. This way we can make a complete list to help other players who are stuck. Thanks in advance!

UPDATE: Thanks to M. Francis for sending these in!

Thanks to everyone who sent these in!

The update also adds a limited time Imperial Decorator Droid VIP. Using the droid will earn you "exclusive, limited-edition rewards". The droid will also " spread holiday cheer throughout the floors of your Death Star," according to the version 1.2 release notes.

Star Wars: Tiny Death Star is a free to play building game based on NimbleBit's popular Tiny Tower title. The game is free to download from the App Store, and it is compatible with all iOS devices running iOS 6 or later.

UPDATE: I found him! The Imperial Decorator Droid icon will eventually pop up on your screen. You can summon him once for free, then spend Imperial Bux to summon him again. 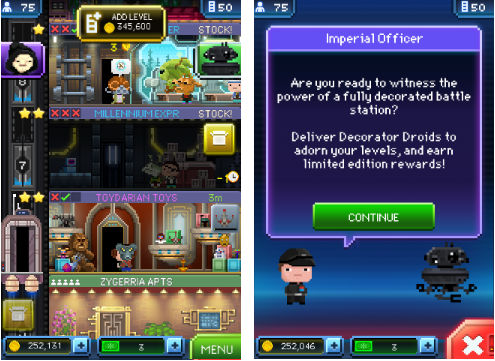