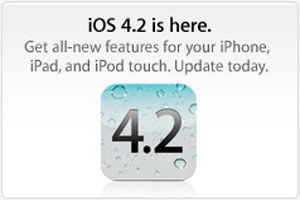 One surprise is that the Find My iPad service will be free for those updating to iOS 4.2. Before this update, Find My iPad required paying for a MobileMe subscription. Now if your iPad gets lost you can find it on a map using a web browser.

AirPlay on the iPad will make it possible to stream live audio and video to supported devices, while AirPrint opens up direct wireless printing from the iPad. Game Center adds a social hub and live person-to-person gaming experience, where players can challenge each other or compete on leaderboards.

All of your email can be integrated into one unified inbox with the Mail app in iOS 4.2. Support for calendar invitations has also been added, making it easy to import events into the Calendar app. Safari now has a web page search function, and many other improvements and features have been added to the iPad.

When you're ready, sync, back up, and update your iPad using iTunes. The iOS 4.2 update is available now for free.