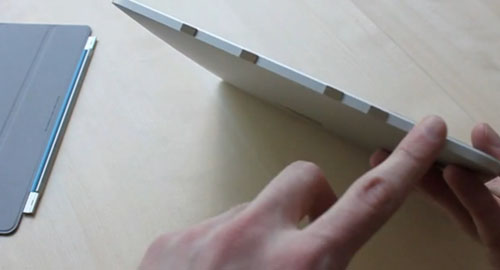 Everything is lined up because the magnets were placed directly across from their counterparts inside of the Smart Cover. You can easily find the right location by placing the magnets on the Smart Cover until they stick. The strongest bond indicates where the magnets should be placed on your original iPad.

Provost used Super Glue to semi-permanently affix the magnets to the iPad's metal body. They can still be removed by gently tapping them off with a hammer and flat head screwdriver. With the magnets firmly attached to the iPad, the Smart Cover will work as a typing stand, viewing stand and screen protector. The only drawback is when the Smart Cover is removed the magnets will not be hidden or flush with the iPad edge.

Still, this is a small price to pay for having a Smart Cover on the original iPad. Not to mention that the magnets cost only 20 cents each. It sure beats spending $500 plus on a new iPad 2. Now we have to wonder if the iPad 3 will be compatible with the original Smart Cover, so we can hang that on our fridge.