There are a lot of iOS accessories being shown off at CES in Las Vegas this week. Several multi-docs have been showcased including XtremeMac's new InCharge lineup. The only difference between the InCharge Duo Plus, InCharge X3, and InCharge X5 are the prices and how many devices each multi-dock holds. The $100 X3 holds three devices and the $150 X5 holds five. Pricing for the Duo Plus hasn't been announced. All three multi-docks feature an LED status indicator, rubber feet, case-friendly charging cradles, and are 10 watts per dock.

Another interesting iPad accessory is the Targus iNotebook. It allows you to wirelessly transfer what you write on paper to your iPad. The Bluetooth-enabled iNotebook communicates with a special pen that doubles as a stylus which can also write directly on the iPad without scratching it. The iNotebook ships with a replaceable 9 ½ x 7 ½ notepad and leather portfolio case. There is also a free iNotebook app available in the iTunes App Store. The app allows notes to be saved to iCloud so you can transfer them to other devices later. It also offers Facebook and Twitter integration for sharing notes socially. 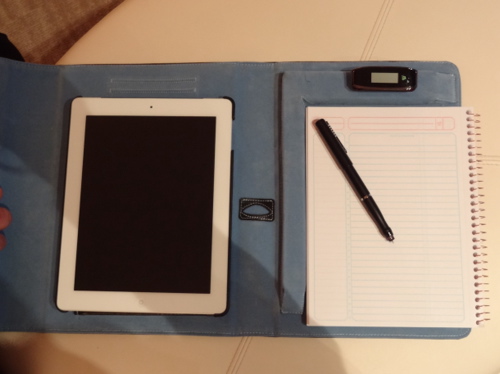