How much is a Microsoft Office Subscription for the iPad?

UPDATE: The first month of Office 365 is now free.

Microsoft released Word, PowerPoint and Excel as individual iOS apps to the Apple App Store on Mar 27, 2014. The apps are free to download, but the free versions only allow users to view Office documents on their iPad. You will need a Microsoft Office subscription to edit and create documents using any of the apps. 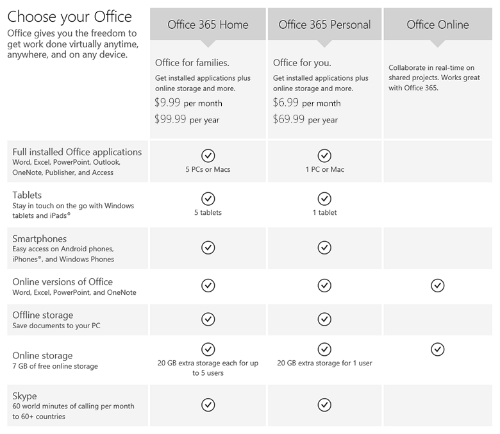 Microsoft offers two subscription services to iOS users: Office 365 Home is available for $99.99/month as an in-app purchase or through the Microsoft Online Store or at third party retail locations. An Office 365 Home subscription allows up to five PCs or Macs, and five tablets (including iPad) to be connected to the service.

Office 365 Personal is also available on the Microsoft Online Store or through third party retailers for $69.99/year or $6.99/month. An Office 365 Personal account allows for one PC or Mac, and one tablet (including iPad) to be connected to the service.