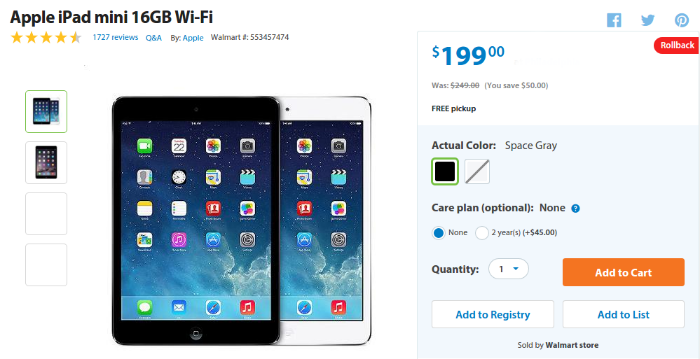 Walmart has rolled back the price of the original iPad mini to $199. The 16GB WiFi-only model normally retails for $249. The deal is available through walmart.com or at Walmart retail locations. There is no question that this deal offers big savings, but is it really worth buying the original iPad mini when the fourth-generation model is only a few months away?

All three iPad mini models will support iOS 9 when the new OS is released this fall, but the older hardware will not be able to support some new features, such as multitasking. Besides being left out of some iOS 9 perks, the iPad mini is still a good device, especially for only $200. It sports the same 5MP iSight camera, Lightning connector and video recording capabilities as its successors, but it does not include all the bells and whistles like Touch ID.

The iPad mini sports a 7.9-inch 1024‑by‑768 resolution display, a front-facing FaceTime HD camera and it is powered by Apple's A5 chip. It also ships with Siri and other iOS 8 features.