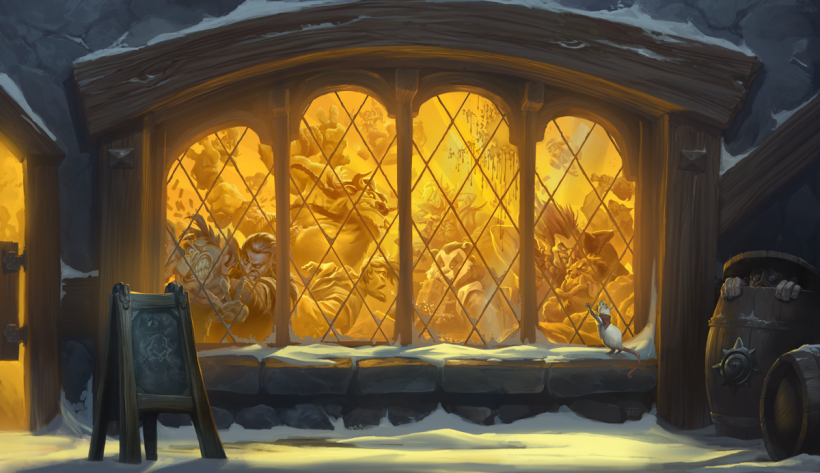 Blizzard has updated the Hearthstone: Heroes of Warcraft iOS app with the first "Tavern Brawl" titled, "Showdown at Blackrock Mountain". A Tavern Brawl is weekly challenge where players are pitted against other players in matches with unique rules. For example, one week players may have to fight with preset decks, while another week could require them to craft decks with a specific set of guidelines. This week players can choose to fight as either Ragnaros or Nefarian and battle with premade decks. Showdown at Blackrock Mountain is free to play. It closes on Monday, June 21 at 3:00 AM PDT.

The update also adds new heroes for the Warrior, Hunter, and Mage classes, the ability to add different card backs to different decks, and other updates and bug fixes that you can see below.

You can learn more about the Tavern Brawls and new heroes on the battle.net blog.

Hearthstone: Heroes of Warcraft is a free collectible card game for the iPod touch, iPhone and iPad. Players can also play across devices, inclduing their desktop, by using their free Battle.net account. The app requires iOS 6.0 or later to work and is available for download on the Apple App Store.

* Introducing Tavern Brawl! Each week, a different Tavern Brawl will pit you head to head versus another player using exciting and unique rules. One week might feature preset decks, while another week could have you crafting a brand new Tavern Brawl deck following specific guidelines, while others might offer buffs to specific minion types. The possibilities are endless! Tavern Brawl unlocks for players who have at least one Hero at level 20.
* New Challengers Appear! New heroes for the Warrior, Hunter, and Mage classes are now available for purchase. They each feature an animated portrait, a unique animated version of that classes’ existing hero power, a special ‘hero tray’, all new emotes, gorgeous match start animations, and a themed card back.
-- Warrior Hero Magni Bronzebeard
-- Hunter Hero Alleria Windrunner
-- Mage Hero Medivh
* You can now assign a card back to each of your decks.
* You can now view your hard-earned card backs as well as card backs you have not yet acquired in the collection manager.
* The collection manager has been updated. In addition to the new card back and heroes tabs, the crafting button is in a new location, filtering cards by mana cost can be turned on and off by selecting the gems, and there is a new section for filtering cards by set.
* The following card backs have been added:
-- Galaxy Gifts
-- Darnassus – Acquired by reaching Rank 20 or higher in Ranked Play mode during the month of June. Card backs are awarded at the end of the Ranked Play season.
* The Blackrock Mountain game board has been added to the game board rotation in Play and Arena mode.

* You no longer have to log-in again when prompted to accept a new Terms of Use
* Core Rager now properly shows its attack and health buff in the History Tiles.
* Fel Reaver now properly generates History Tiles when it destroys cards.
* Non-golden Chromaggus now properly creates golden cards when the card drawn is golden.
* Nozdormu no longer continues to produce a sandstorm effect after being Transformed.
* Gang Up no longer displays more than 3 cards after being used on cards with Choose One.
* Fixed an animation issue when golden cards with Taunt are destroyed.
* Fixed an issue where Steamwheedle Sniper’s targeting effect was not appearing over the Golden Hunter’s Hero Power.
* Fixed various graphical, sound, and UI issues.