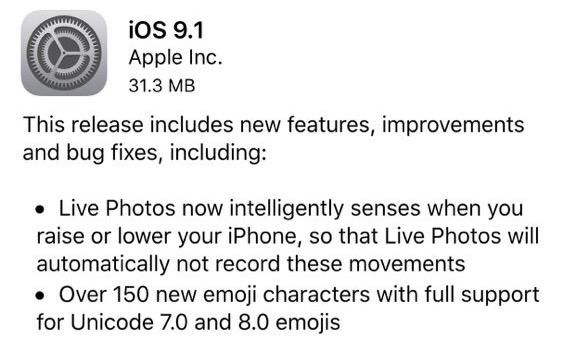 Apple today has released iOS 9.1 for the iPod touch, iPhone and iPad. The update features mostly bug fixes but it also add over 150 new emojis and improves Live Photos for iPhone 6s and 6s Plus owners. The update fixes an Audio Message bug that was stopping users from sending text messages, and issues affecting the Calendar app, App Store and Game Center. The update also includes improvements in the Multitasking UI, CarPlay, Music, Photos, Safari, and Search. Here's the iOS 9.1 changelog.

Users with the Pangu 9 jailbreak tool installed on their device should avoid upgrading to iOS 9.1 if they want their device to remain jailbroken. Apple's security content specifically lists the Pangu Team, meaning that the exploits used in the iOS 9.0 jailbreak tool have been patched. Installing iOS 9.1 on a jailbroken device will break your jailbreak.

Users who wish to upgrade to iOS 9.1 can do so by navigating to Settings > General > Software Update.