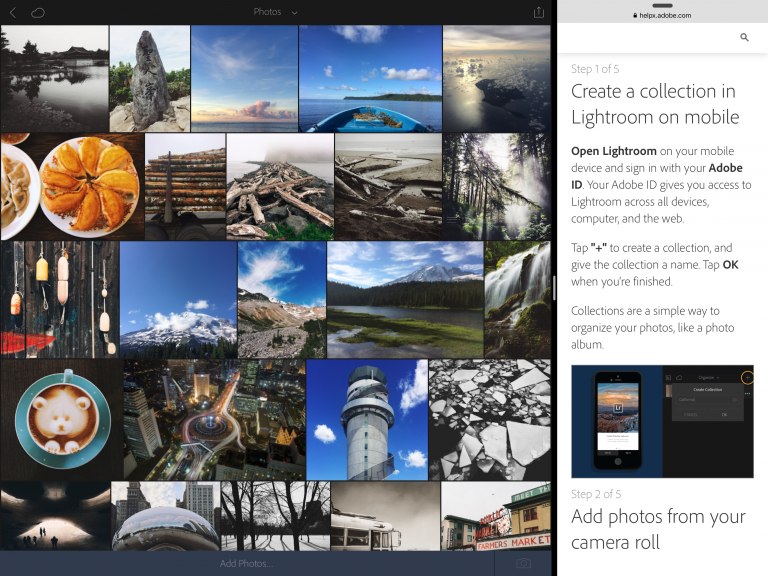 Lightroom for iPhone has been updated with 3D Touch support for the iPhone 6s and 6s Plus. Users can now quickly access their Adobe camera from their Home screen, and use Peek and Pop actions within the Grid View.

Both apps have also received five new presets for the Adobe camera, a new full function Tone Curve tool and they also include a Notification Center widget in case the 3D Touch quick action menu is not an option.

You can learn more about Lightroom for mobile 2.1 by visiting the official Adobe blog or checking out the complete changelog below.

• New: iPad Pro support. Take advantage of the iPad Pro’s brilliant visual experience while adjusting color, tone or brightness in your photos. iOS9’s Split View and Slide Over multi-tasking enhancements make Lightroom for mobile + iPad Pro the best combination for photographers on-the-go.
• New: Shoot-through Presets. Apply one of five new, specially formulated presets while capturing a photo from the Adobe in-app camera. Preview how the presets will be applied to your photo before you capture, and enjoy the freedom of adjusting settings after capture with full non-destructive capabilities. Shoot-through presets are available for 64-bit devices only, such as iPhone 5s and later and iPad Air and later.
• Enhanced: Tone Curve – Point Curve Mode. Now, take color control to the next level with a full function Tone Curve tool, enabling access to RGB as well as individual red, green and blue color channels in your photo.
• New: Split Tone adjustments. Create a distinctive look to your photos by applying a color tone to the highlights or shadows, or to replicate the look of a split-toned black and white photo.
• New: Notification Center widget. Get instant access to the Adobe in-app camera by enabling the Lightroom for mobile Notification Center widget. Automatically launch the in-app camera with a single swipe down.
• New: 3D Touch support on iPhone 6s/6s Plus. Get direct access to the in-app Adobe camera from your home screen, and a quick preview of your photo with Peek and Pop within the Grid View.
• Enhanced: Usability improvements throughout the app. Add photos to multiple collections easier, import photos faster, improved gesture support, and more, get you quickly organizing, creating, and sharing amazing images anywhere you are.

Both Lightroom for iPad and iPhone are available for free on the Apple App Store. Both apps requires iOS 8.1 or later, but you will need iOS 9.0 or later to take advantage of the new multitasking features.