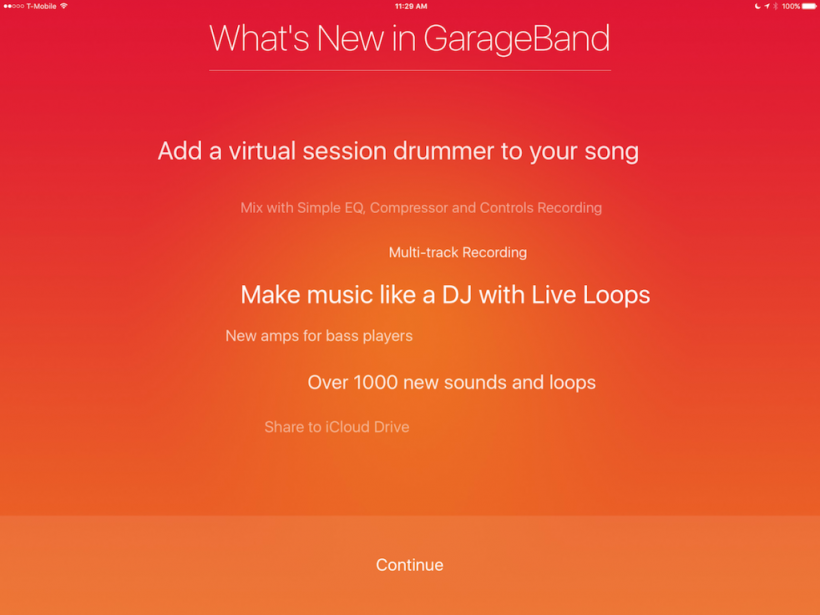 After launching a new app that allows iOS users to qucikly record song ideas, Apple rolled out a huge update to its original music creating tool, GarageBand. Version 2.1of the app includes a ton of new features, plus support for Apple's newest devices, the iPad Pro and both iPhone 6s models.

Apple says the new version of GarageBand "looks stunning on the expansive 12.9-inch Retina display on the iPad Pro." The larger screen also gives iPad Pro owners access to more controls and room to play. On the iPhone 6s and 6s Plus musicians can now utilize 3D Touch to play keyboard sounds with polyphonic aftertouch.

The biggest new feature according to Apple's press release is Live Loops. The new feature allows users recreate a live DJ experience by "tapping cells and columns in a highly visual grid to trigger different looped instruments and samples."

Apple even drummed up an endorsement from the Grammy Award-winning artist and producer, T-Pain, for its new Live Loops feature.

“I recorded my first album using GarageBand and I continue to use it in my music today,” said T-Pain. “I love how the new Live Loops in GarageBand lets me quickly build tracks and beats, and even perform effects like a musical instrument. It’ll change the way an entire generation makes music.”

Other new features include the ability to record up to 32 tracks simultaneously on the iPhone 5s, iPad Air, iPad mini 2, or later devices, the ability to play a real bass guitar through vintage and modern bass amp rigs, and more. You can see a complete list of new features below.

GarageBand 2.1 is bundled free with any new 32GB or larger iOS device, or as a $4.99 download from the App Store. It supports all devices running iOS 9.1 or later, and it available as a free update for users who already have the GarageBand installed.