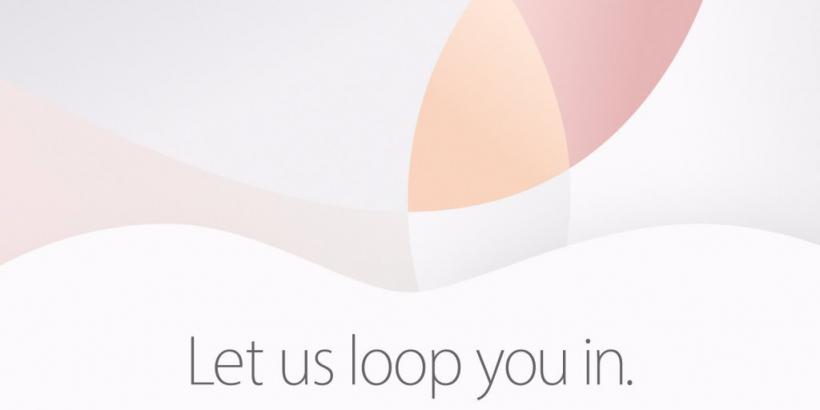 Apple on Thursday sent out invites for its first major keynote of 2016. The event is being held at Apple’s 1 Infinite Loop campus on March 21st at 10 am PT/1 pm ET. The invitation reads, "let us loop you in." Apple is expected to launch the iPhone SE, 9.7-inch iPad Pro, new Apple Watch bands and iOS 9.3. Here are all the rumors leading up to the event:

The next-generation iPad will be a 9.7-inch version of the recently released 12.9-inch iPad Pro. The new iPad Pro will ship with A9X and M9 chips, a 12MP camera, a rear-LED flash, quad speakers, Apple Pencil support and a Smart Connector for use with Apple's new Smart Keyboard, which is also expected to be unveiled at the event. Other not so credible rumors claim the next-generation 9.7-inch iPad will be waterproof, feature 4K video and include more RAM.

The rumored iPhone SE is a 4-inch device that will replaced the iPhone 5s in Apple's current lineup. The iPhone SE will not incorporate all the new features only found on Apple's 6s devices, such as 3D Touch, but it will ship with an A9 and M9 chip and Live Photos support. The iPhone SE will also include Apple Pay support and always-on Siri. The new handset will be available in 16 and 64GB storage capacities with space gray/silver/gold/rose gold options.

Apple's first keynote of the year was expected to be all about the Apple Watch, but now it doesn't look like we will see a hardware update until the fall. Instead Apple will allegedly release a few new bands for its wearable device. Recent rumors have suggested we will see some new Sport band colors and a Space Black Milanese Loop band, according to 9to5Mac.

Apple has been testing iOS 9.3, OS X 10.11.4, watchOS 2.2, and tvOS 9.2 for quite some time. All four updates will most likely be rolled out the same day as the keynote. iOS 9.3 introduces Night Shift mode, passowrd protection for the Notes app, better Apple Music intergration for CarPlay and more.