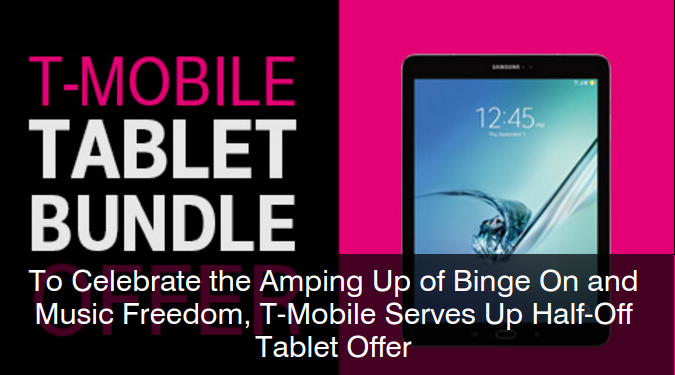 In celebration of adding 16 new music streaming sources to its Binge On and Music Freedom services, T-Mobile is offering up to $200 off the purchase of a tablet when you buy a smartphone from the same manufacturer. Anyone who purchases a new Apple, LG or Samsung smartphone can also buy an additional tablet for half off.

"Anyone who buys a flagship smartphone from Apple, LG or Samsung on Equipment Installment Plans (EIP) can get up to 50% off any tablet from the same brand (up to $200) with a prepaid card for a limited time while supplies last."

The promotion includes up to $200 off Apple's new 9.7-inch iPad Pro, which is a great deal for T-Mobile customers planning to purchase the new iPhone SE. Taking advantage of T-Mobile's tablet deal would allow you to nab a 32GB WiFi-only iPad Pro for $329, or you can knock $200 off the 12.9-inch model pricetag. The 50% off applies to all available iPad models through T-Mobile when you purchase a new iPhone on an installment plan. You can head on over to T-Mobile's News Room for more details and fine print.

"As of today, you stream unlimited music and video from over 100 providers - without ever touching your Un-carrier Data or worrying about overages—and you can stash what you don’t use for later," explained T-Mobile CEO and president John Legere.

You can learn more about Binge On and Music Freedom at t-mobile.com.