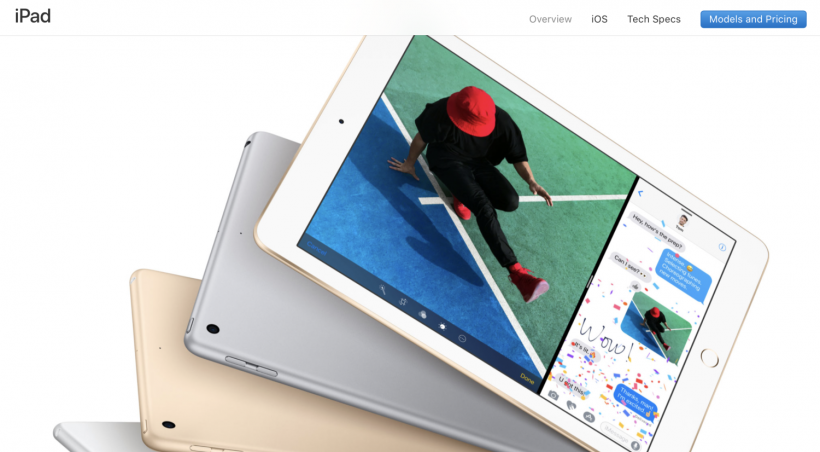 Apple today quietly announced a new $329 iPad to replace the aging iPad Air 2. Simply called "iPad," the new 9.7-inch tablet is a slightly heavier and bulkier model with recycled hardware. It ships with the same same A9 chip that powers Apple's current iPhone models, and it does not include new features, such as the Smart Connector. The new iPad is around 20% thicker (7.5mm) than the iPad Air 2 and it weighs 1 pound. The iPad Air 2 is a slimmer 6.1mm model that weighs 0.96 pounds.

The 2017 iPad model is equipped an 8MP camera, a front-facing FaceTime HD camera and Touch ID. It is only available with 32GB of storage in silver, gold and space gray color options . The WiFi-only model will be available for $329 and the 32GB WiFi + Cellular model will cost $459. The new iPad will be available through apple.com Friday March 24th. The tablet will begin shipping to Apple retail locations and Apple authorized resellers sometime next week.

The iPad mini is now only available as a 128GB model. The WiFi-only model is $399 and the WiFi + Cellular model is $529. This means the iPad mini is now more expensive than the 9.7-inch iPad, but you get a lot more storage for the extra dollars spent. The storage increase also puts an end to rumors that Apple had planned to stop making 7.9-inch iPad models.

Apple did not hold a special keynote for its new iPad roll out like some rumors had predicted. Instead the company issued a press release after updating its website with several new products, including a new red iPhone 7. Apple is still expected to refresh its iPad Pro lineup with a second-generation 12.9-inch model and new 10.5-inch model. It is unknown when Apple plans to launch the iPad Pro 2 and unnamed 10.5-inch model, but some sources have indicated an April event with May launch.